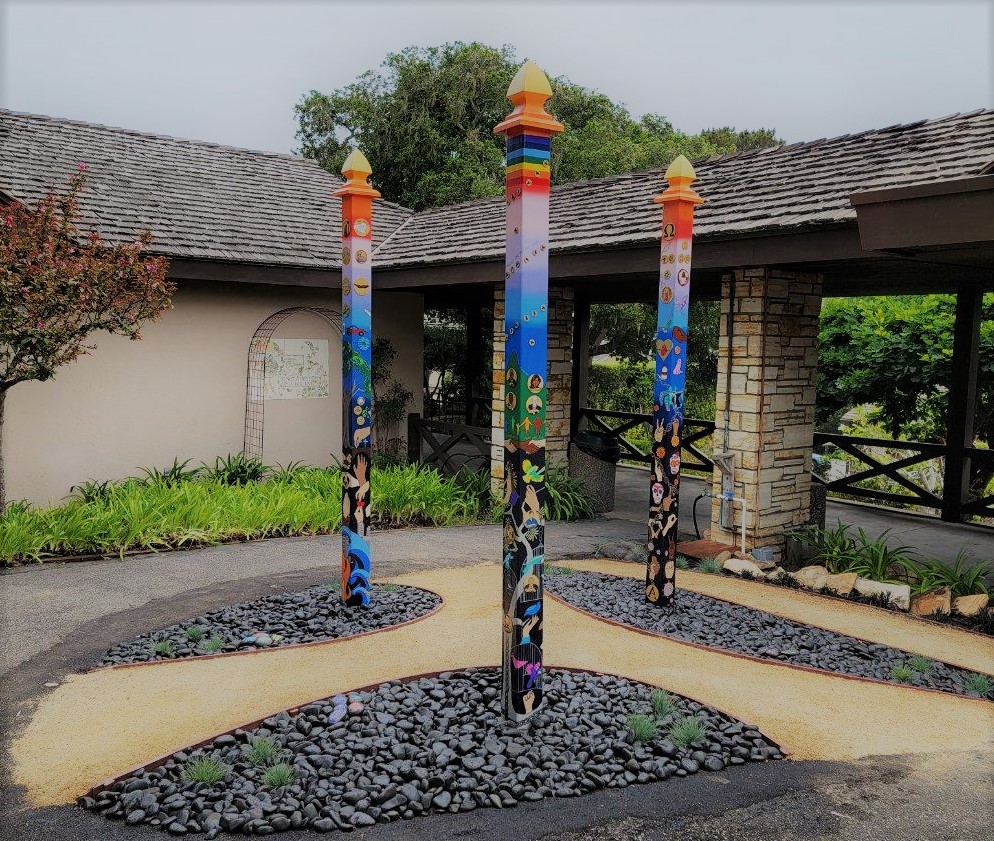 Love is the way: A Holy Evolution

Lead us from darkness to light. . .

Peace Post 3 (right): Holy Reconciler encourages us to foster freedom and reconciliation for all in the face of injustice and inequality.

A few months in to the COVID-19 pandemic our faith community was concerned about creating a sacred space for people to remember those who died from the virus since the churches, temples, synagogues, and mosques were closed. In the year 2020, we also had an acute awareness that humanity was struggling with more than just the pandemic, we grappled with the ravages of climate change as experienced in the thousands of California fires, and we were disheartened with the racial inequalities and injustices that surfaced in numerous brutalities and deaths of people of color.

The peace post project is a joint effort of All Saints Day School and All Saints’ Episcopal Church to visualize a path forward, for children to imagine how humanity can evolve in love and harmony with nature and with one another and emerge on the other side of these challenging global circumstances. We want to offer a sacred space and a healing message through art which nurtures fruitful dialogue to find common ground with our neighbors and invites us to choose a path of conscious love.

We invite you to imagine a future with us where “love is the way” by sharing your experience:

Read more about the project

The Advent of the Project

All Saints’ Church wanted to offer a sacred space that was easily accessible in our gardens to visitors and passersby that would bring comfort, compassion, and commemorate the more than 600,000 people who have died in the United States and the 3.5 million people who have died globally. It was suggested that we plant a peace post similar to projects that First Night has done in Monterey County. First Night is the non-profit organization that seeks to “bring families together and unite our community in all its diversity through the visual and performing arts” each New Year’s Eve. We are grateful to Executive Director Ellen Martin who helped orient us to the necessary supplies and procedures for setting up the art project.

All Saints Day School was delighted to accept the challenge of creating three peace posts during the pandemic. Initially, we were going to create one post for the pandemic, but then realized that we were dealing with much more in 2021; there was also the rapidly changing environment due to global warming and the mounting racial inequalities in our country. The three situations that concerned us are not in isolation from the others and portraying them together could open doors for new conversations and perspectives that lead to transformation and the forming of a “beloved community.”

We are deeply grateful to Head of School, Scott Fujita, and to Kim Raisbeck, the art teacher for her dedication and outstanding work in organizing the project, and to our 6th, 7th, and 8th grade students who imagined a loving way forward for all of us.

The theology & meaning in the three peace posts

Inspired by the theology of Pierre Teilhard de Chardin, a 20th century French Jesuit priest and paleontologist, the three posts embrace a dynamic trinitarian theme and an understanding that “everything that rises must converge and unify.” Teilhard de Chardin had a vision of Christ as the Omega point, the final goal of evolutionary consciousness where we are perfected in love and united to God. In our final union with God, the world becomes divinized and is filled with the radiance of God’s love. This upward thrust is represented on the peace posts as the artwork moves from darkness, at the bottom of the posts toward the dawn and the light of day.
Human hands reach, climb, and pray their way to the summit. Each student’s hand is painted on the post representing a letter or word in American Sign Language (ASL). There are hands depicted in different flesh tones in the form of a handshake, a prayer, or in power symbolizing a diversity of peoples coming together to unify and to support one another through the pandemic, climate change, and racial injustice.

The first post, “Holy Creator”, designed by the 6th grade class, creates a way forward through global warming. At the bottom of the post, we witness the effects of climate change: rising sea levels, pollution, and fires, and the world in chaos. As we ascend the post we are invited to care for the planet with nurturing hands, to plant seeds, and tend to all life forms. We see the evolution of technology for alternative energy and the numerous reptile and animal species that are threatened with extinction.

“When God began to create the heavens and the earth, the earth was a formless void and darkness covered over the face of the deep. . . -Genesis 1.1
“Our thoughts create our world.”  -Gautama Buddha
“Nothing here below is profane to those who have the eyes to see.”  -Pierre Teilhard de Chardin
“The success of humanity will not be determined by the survival of the fittest, but rather by our own capacity to converge and unify.”   -Pierre Teilhard de Chardin

“Holy Redeemer”, the second post depicted by the 7th grade class, imagines a way through the COVID-19 pandemic. From the bottom, it begins with paintings of viral molecules which evolve into marigolds as it moves out of darkness. Day of the Dead skulls represent the millions who have died from the virus. In the midst of the chaos, the overwhelm of sickness and death, and the numerous protective measures and restrictions, we are held by the Redeemer, the Christ, our healer, between the Alpha, at the foot of the post, and the Omega, at the top.

The symbols of the world’s religions are displayed on medallions in the sunny tier where people have turned their gaze in prayer for comfort, healing, and hope. The four goddesses surrounding the post reach out their arms in loving compassion. Human DNA weaves around throughout the post from bottom to top, evolving and transforming as we discover new ways to thwart the virus and as we learn to choose a path of love and compassion.

“Lead me from darkness to light, from the unreal to the real, from death to immortality.”  -Vedic Prayer

“I know that my Redeemer lives and at the last he will stand upon the earth. After my awaking, he will raise me up and in my body I shall see God.”  -Job 19.25-27

To complete the trinity, the third post, “Holy Reconciler”, winds a way through racial injustice and the struggle for freedom as it climbs the olive tree of peace. The 8th graders were inspired by Maya Angelou’s poem, “I Know Why the Caged Bird Sings.” Images of caged birds, hanging from the branches of the olive tree, reveal their great longing for freedom. Busts of men and women who have led oppressed peoples towards liberty and equality hang from the tree and include slavery abolitionists, women’s suffragists, Native Americans, Latino farm worker activists, and Asian-American activists. We also see the fruits of their labor on the mountain with the circle of rainbow people becoming one in the “Beloved Community”. A line form Amanda Gorman’s poem, “The Hill We Climb,” outlines the ridges of the mountain. Above the mountain, in newly found freedom a flock of birds take flight up to the sky and into the gay pride rainbow, a symbol of peace, diversity, inclusivity, and unity.

“the caged bird sings of freedom”
“the free bird names the sky his own”  -Maya Angelou
“Beloved Community”  -Martin Luther King, Jr.
“May We All Be One”  -John 17.21
“If we merge mercy with might, and might with right, then love becomes our legacy and change our children’s birthright.”  -Amanda Gorman, The Hill We Climb

Together, these three posts form a larger picture of humanity’s struggle to reach for a higher consciousness, a loving awareness of ourselves, our neighbors, and all life forms on our planet. Creation, redemption, and reconciliation are ongoing processes that require our faithful attention and practice. May we all be encouraged to choose loving action in response to seeing these beautiful peace posts and to remember those who have given their lives for the good of all.

We give thanks to all those who share our vision to offer a sacred space and to share healing and peace with our neighbors both near and far.

We are grateful to all of our donors who have made this project possible for the creation and the installation of these peace posts in the Edith Williams Memorial gardens at All Saints’ Episcopal Church in Carmel, California.